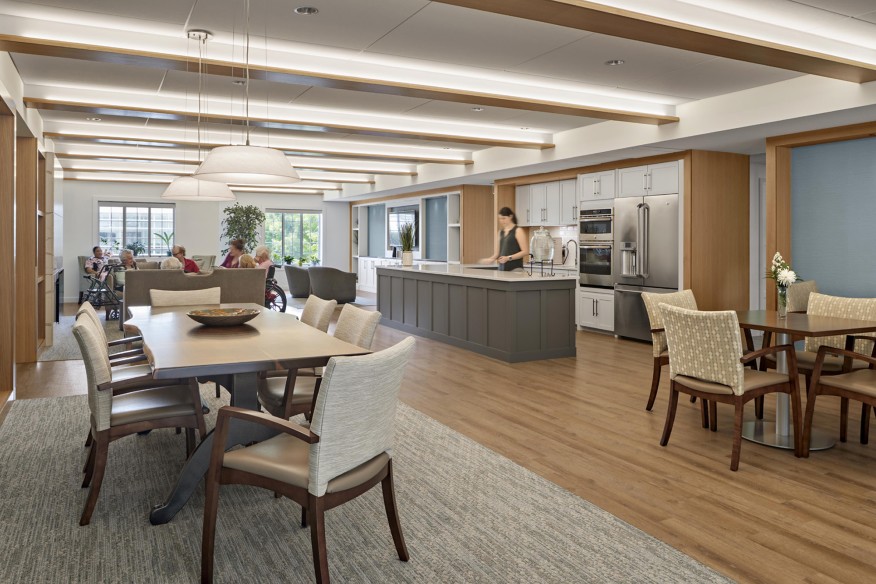 Getting Better with Age: Design for Senior and Assisted Living Facilities

This piece originally appeared in the Journal of the American Institute of Architects, June 29, 2018: Getting Better With Age Design For Senior And Assisted Living Facilities_o/strong>
Author: Alice Liao

In the late 1990s, a movement began to deinstitutionalize senior living and, in particular, nursing homes. The concept of person-directed care focuses on the needs of individuals, rather than on those of the institution, and gives them agency in determining how best to fulfill those needs. As part of the movement, open-plan, residential-scale settings, in which empowered residents and caregivers partner to create nurturing communities, became popular.

This shift could not be more timely. Although the 70 million-plus baby boomers are still about a decade away from the average age at which most people move into these communities—82—their influence can already be seen in the greater choice of amenities, services, and locations available across the continuum of care. Moreover, the small household model is particularly suited for people with Alzheimer’s, whose numbers will nearly triple from 5.7 million to 14 million by 2050, according to the Alzheimer’s Association.

Several key standards, codes, and guidelines apply to the building and design of senior living. Accessibility issues are addressed by the Americans with Disabilities Act (ADA). The Facility Guidelines Institute (FGI) Guidelines for the Design and Construction of Residential Health, Care, and Support Facilities, published every four years, provides direction on programming in skilled nursing, or nursing homes, and assisted living. Building inspectors use the International Building Code (IBC), which is updated every three years by the International Code Council. And NFPA 101, Life Safety Code, updated by the National Fire Protection Association every three years, guides fire officials.

Though every state recognizes the IBC and Life Safety Code, individual jurisdictions can deviate from the published editions. And while 40 states reference some version of the FGI guidelines as a base standard from which to craft regulations, the remaining balance write their own. This lack of consistency across regions can create conflicts over how senior housing is constructed, which materials are used, and how safety measures are implemented. For example, clients operating facilities in multiple states may question why projects cost more in one state than another, says Martin Siefering, AIA, a Pittsburgh-based principal of Perkins Eastman and co-chair of the AIA Design for Aging advisory group.

Although recent revisions to the codes and standards have focused on assisted living and nursing homes or skilled nursing, the continuum of senior housing is defined by a progression in the level of care provided, beginning with the most self-sufficient seniors.

Independent Living
Independent living covers a wide gamut of building typologies, from cottages to townhouses to apartments, and can range in size from 1,500 square feet to 2,000 square feet. Floor plans typically include a full kitchen, living, and dining areas. Residents have access to shared dining venues, amenities for socializing, recreation, and fitness, as well as concierge services such as laundry and housekeeping.

In recent years, food service in these communities has expanded to encompass different types of cuisines, restaurants, pubs, cafés, and bars, says Cynthia Shonaiya, AIA, director of the senior living studio at Hord Coplan Macht in Baltimore. Menus are also emphasizing healthy, fresh ingredients, a departure from the more institutionalized cooking served in the past.

The IBC classifies independent living as R-2 residential use, which subjects it to the same building and safety requirements as multifamily housing and dormitories. The appendix of the FGI guidelines also offers design recommendations.

Assisted Living
Seniors in assisted living receive help with the activities of daily living, which include bathing, eating, dressing, toileting, getting in and out of a bed or chair, and walking. Typically designed for single occupancy, an assisted living apartment may range from 320 square feet to 650 square feet and contain a bedroom, bathroom, living area, and kitchenette. Dining is mostly communal and a host of shared amenities and services are available. Assisted living communities are licensed by the state.

Memory care is a type of assisted living that provides a safe, controlled environment for people with Alzheimer’s, dementia, and other forms of memory impairment. Because high levels of noise and activity can agitate residents, a memory care building or household, if part of a larger project, will consist of 10 to 20 residents who each have their own apartments or bedrooms but share dining, living, and other activity spaces.

The 2015 IBC brought clarity to the occupancy and use classification of assisted living buildings that house 16 or more people. While assisted living is generally considered institutional, confusion lingered over whether an I-1 or I-2 designation was more appropriate, says James Warner, FAIA, principal of housing and senior living, at JSA in Portsmouth, N.H. The I-1 designation assumes the ability of residents to evacuate in an emergency and allows wood-frame construction; I-2, which applies to hospitals and skilled nursing, requires noncombustible construction for multistory buildings.

This 2015 update addresses the issue of self-preservation by appending two conditions to its I-1 classification: Condition 1 stipulates the ability for occupants to evacuate a building without any assistance; Condition 2 allows minimal verbal and physical assistance, which aptly describes seniors in assisted living. “The I-1 Condition 2 requires a higher standard of construction, but it, too, can be built out of wood up to three stories,” Warner says.

Some issues remain, however. The I-1 Condition 2 classification mandates doors with a 20-minute fire-protection rating and automatic closers, making them difficult for frailer occupants to operate and for memory care staff to observe residents, who “are often frustrated when confronted by closed doors,” Shonaiya notes.

Skilled Nursing
Skilled nursing houses seniors who need long-term medical care or short-term rehabilitation after a hospital procedure. Traditional nursing home designs were modeled after hospital wings and may cram 60 beds among two quarters with a nursing station in the middle, Warner notes. Some have double-occupancy rooms, with a cubicle curtain for privacy. Dining occurs at set times, and meals are pre-packaged, pre-portioned, and prepared in a large, central kitchen.

The Linthicum, Md.–based Green House Project is one organization proposing an alternative design. Its eponymous small-house solution creates a home-like environment by limiting the number of residents to 10 and decentralizing support staff and services. Resident rooms are grouped around an open-plan living area (often with a fireplace), dining area, and kitchen that’s accessible 24/7, “so anyone who wants a meal, a beverage in the middle of the night, for example, would have access to that,” says senior director Susan Ryan.

Currently, 80 percent of the 246 Green House homes—in 33 states—are designated for skilled nursing (the rest are assisted living). None of these would have been possible without changes in state and federal building and fire codes. The open kitchen, for example, required adding new sections on hazardous areas to the Life Safety Code, which any nursing home receiving Medicare or Medicaid funding must follow. The federal government currently uses the 2012 edition, which permits open kitchens in new qualified nursing homes, says Skip Gregory, president of Tallahassee, Fla.–based Health Facility Consulting.

Updates to the FGI guidelines have also helped advance the design and culture of nursing homes, Gregory says. The 2010 edition led to a new room design by specifying that all residents have unimpeded access to an exterior window and, hence, daylight, a closet for personal belongings, and a toilet room that can be accessed without going through another person’s space. In 2014, FGI issued two sets of guidelines—one for the design and construction of hospitals and outpatient facilities, and the aforementioned guide for residential health, care, and support facilities—that focus on person-centered care and incorporate cultural shifts in values: choice, dignity, respect, self-determination, and purposeful living. In 2018, FGI released separate guidelinesfor hospitals and for outpatient facilities.

Life Plan Communities
Also called continuing care retirement communities, life plan communities enable access to higher levels of care by placing the full or parts of the continuum of care under one roof or in one development. These typically multi-acre campuses are located in suburban or rural areas, but newer developments are popping up in urban centers.

Today’s seniors “want to be where the action is, so we’re seeing a number of mixed use projects in a denser environment where there’s retail on the ground floor and a senior living community above it,” Siefering says. The proximity also helps seniors feel less isolated.

However, providing the required number of parking spaces can be a challenge. “The regulations related to parking are not caught up with senior living uses, particularly as you get far down the continuum with assisted living, memory care, and skilled nursing, where the need for a car drops significantly,” says Scott Fitzgerald, senior associate at Perkins Eastman.

Furthermore, in California, skilled nursing cannot be in the same building as the other types of senior housing, says Alexis Denton, AIA, who is a principal of SmithGroupJJR in San Francisco and co-chair of the AIA Design for Aging advisory group. “So the location does determine the type of product, how much you can fit,” she says. “It’s everything.”

“Senior living is an exciting section of architecture,” but one that students are rarely exposed to in school, Shonaiya says. To designers seeking to have a positive impact on society and older Americans, she adds, “I would say senior living deserves a look.”

An independent writer and editor, Alice Liao has covered the building and design industry for more than 15 years. She is a former editor of Architectural Lighting and Kitchen & Bath Business. Her articles have appeared in several publications, including EcoStructure, SNAP, and Hamptons.